Dr. Olena Burlaka, founder of Ukraine's Military Women's Health Initiative, which operates under the auspices of the Ukraine Support Fund, was a speaker at "Forum 2017", the annual conference of the Canadian Institute for Military and Veteran Health Research (CIMVHR). The conference overlapped with this year's Invictus Games, which welcomed veterans from Ukraine for the first time.

Dr. Burlaka was invited to the CIMVHR conference to present the first research of its kind undertaken in Ukraine's war zone, aimed at increasing awareness about the impact that serving in combat operations has on the reproductive health of service women.​

Her address was entitled "The relationship between indicators of mental and reproductive health in military service women deployed in the current war zone in eastern Ukraine." In her remarks, Dr. Burlaka noted that Ukraine's armed forces represent one of the most feminized armies in the world.

Currently, women represent 13% of troop strength. Ukrainian servicewomen currently have the possibility to serve in a multitude of military occupations, such as reconnaissance scouts, snipers, anti-aircraft gunners, combat vehicle mechanics, and many more.

Dr. Burlaka's presentation met the learning objectives of the CIMVHR conference, since it directly relates to research programs that focus on military and veteran health. The goal of her work is to use her gender-specific study to improve health care for veterans and those still serving in combat operations.

Ukraine's daily national newspaper, ​The Day (Den),  ran a feature story on Dr. Burlaka's presentation at CIMVHR. Click here for the Ukrainian-language edition of the article. 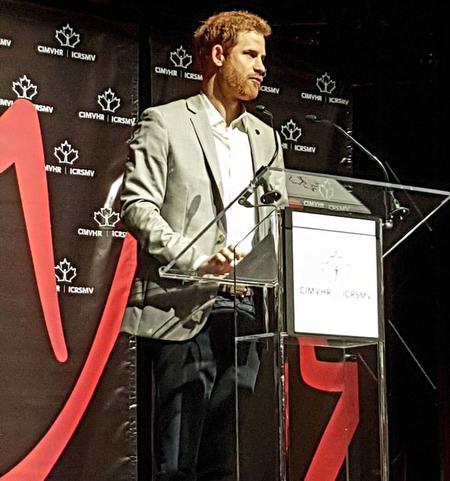 Dr. Olena Burlaka speaks with representatives of the Canadian Armed Forces after her remarks 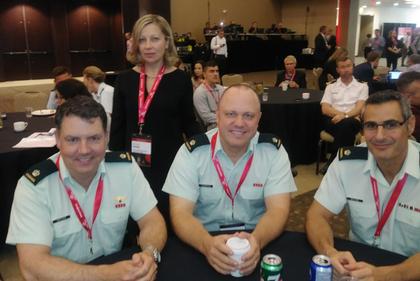 Prince Harry speaks with Dr. Olena Burlaka at the opening of the CIMVHR conference in Toronto

Enlarge smaller photos by clicking on them 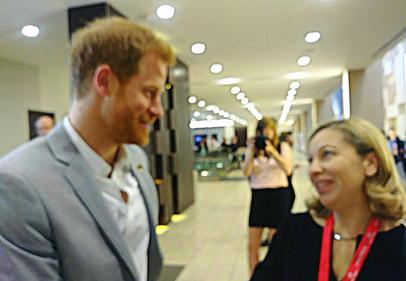